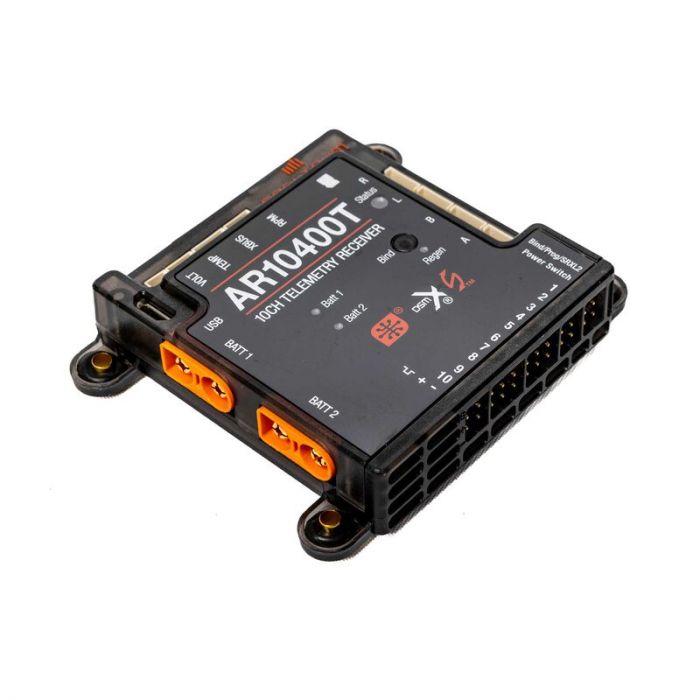 Skip to the beginning of the images gallery
Details

The Spektrum™ AR10400T PowerSafe™ receiver is a feature-packed 10 channel receiver with integrated full-range telemetry. Spektrum PowerSafe receivers are designed for models using numerous servos and accessories that draw excess current such as those found on giant-scale airplanes and jet models. They feature a robust power bus designed to manage high-current loads, as well as dual battery input ports with IC3™ connectors for use with larger battery packs. This makes it possible to support high-current systems straight through the receiver without the need for a separate power distribution system.

If you have a DSMX®/DSM2® transmitter capable of 11ms frame rates, the AR10400T will deliver lightning-fast input-to-output response that is perfect for high-performance applications such as aggressive 3D , IMAC, and Turbine airplanes. Each receiver includes 3 SRXL2 remote receivers that take full advantage of Spektrum MultiLink™ technology. This patented technology eliminates the reflected signal fading and antenna blind spots that can affect all 2.4GHz systems, helping insure a solid connection between you and your aircraft.

As an added measure of safety, the Spektrum designed the AR10400T receiver with a proprietary soft switch. Allowing servo current to be routed around the switch, so, should the switch fail for any reason, power to the system will not be interrupted.

A ground-breaking feature on the AR10400T PowerSafe Receiver is the built-in receiver battery energy sensors; giving pilots added awareness of the load and mAh used by the servos, retracts, lights, etc. used by each battery.

Each come with built-in connection ports for RPM, Flight Pack Voltage and Temperature sensors as well as an X-Bus port for additional telemetry options.

Morane-Saulnier AI, Seagull Model
$859.95
What's this? Check "Remember Me" to access your shopping cart on this computer even if you are not signed in.